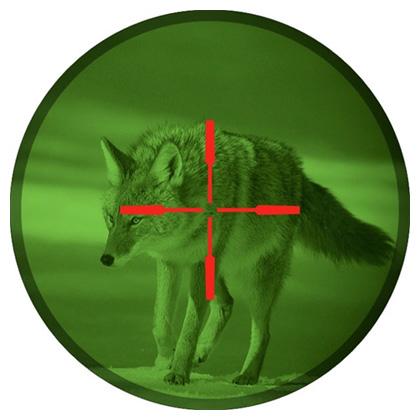 A night vision riflescope is a sighting device designed with the ability to see in dark or extremely low light environments. It combines two existing technologies into one unit: the night vision device and telescopic sight. This means that besides being used to see at night, this device can also zoom in on distant targets.

Night vision in the U.S was developed by William Spicer, an engineering professor from Stanford University – although the Germans had also created their own night vision devices in the mid-1930s to use on tanks and to help foot solders see at night.

This technology first came to practical use during World War II. And while night devices greatly aided soldiers in nighttime combat, the hardware itself had one major setback. These generation-0 night vision devices were quite heavy. The worst part is that they required a large power supply to be carried on the soldier’s back. However, the technology has since made huge leaps over the decades. By the time the Vietnam War started, U.S troops were outfitted with lightweight starlight scopes.

Although night scopes were initially developed for military and law enforcement usage, their use has now expanded to other areas of life. For instance, scientists, bird watchers, and even film directors make use of Night Vision Devices (NVDs) in their lines of work. One of the widest uses of night scopes, however, is nighttime hunting. These gadgets are simply a must-have for wild game hunters who wish to continue their excursions after sunset or just before dawn.

If you wish to buy a night vision riflescope, it’s important to know the proper way to use it, why it works, and how to use one.

How to Use a Night Vision Riflescope

Utilizing a night vision scope is pretty much the same as using a regular rifle scope. You just have to mount the scope properly and point it at whatever direction to spot what you want to see. Much like any other riflescope, you’ll make windage and elevation adjustments to set the night scope’s reticle on your target.

You should expect a different view when using a night vision scope since the images sent back to the scope’s lens mostly appear greenish in color. But unlike old generation NVDs, a night vision riflescope doesn’t need an IR illuminator. Instead, it relies on ambient light and uses infrared lenses that make images in the dark glow by amplifying thermal energy from animals and humans. With this type of riflescope, you can see subjects in total darkness. It also gives you an advantage because some animals simply don’t see that well in the dark. This can be a good alternative for the reticle illumination feature found on some earlier types of riflescopes.

There are many types of night vision riflescopes on the market, and prices and features vary greatly depending on the chosen model and brand. It’s important to know what you’re paying for before settling on any particular scope.

Usually, you can buy a night vision scope as a standalone unit or use the technology on an existing riflescope by simply changing the lenses. Scopes with interchangeable lenses provide much flexibility since you can easily switch between day and nighttime mode. When choosing a night vision riflescope, it’s important to remember that these gadgets come with different magnification ratings. High-powered night scopes are best suited for long range shooting since they can magnify to a farther distance. Other scopes may be equipped with laser pointers that illuminate a red or green dot on targets, which signifies the point of bullet placement.

Keep in mind that the best night-vision scope should be within your budget range and meet your specific hunting needs. If you’re not sure of what to buy, make sure to consult a riflescope specialist for an expert recommendation.